It’s pretty hard in this age of high stress, constantly switched on environment to keep track of our health. And with obesity becoming an ever bigger problem, we’re being pushed to be healthy now more than ever.

So how do you keep track of your health and fitness when it’s rare for us all to get a moment’s break to even just sit and relax for half an hour? Well, this is where the mobile app industry is stepping in to fill this gap. After all, we nearly always have our phones on us right? So why not have apps on there that we can tap into whenever we have a few minutes spare, for example on the bus or something like that?

Well, the good answer is that we do, in droves in fact. The app market is swamped with medical and fitness apps of every kind you can imagine, and they are one of the highest earning types of app on the market. A recent study by the Pew Internet & American Life Project found that many of us are now regularly using mobile apps to track our health in various ways, whether it be our weight, fitness programs, medication routine or even symptoms. 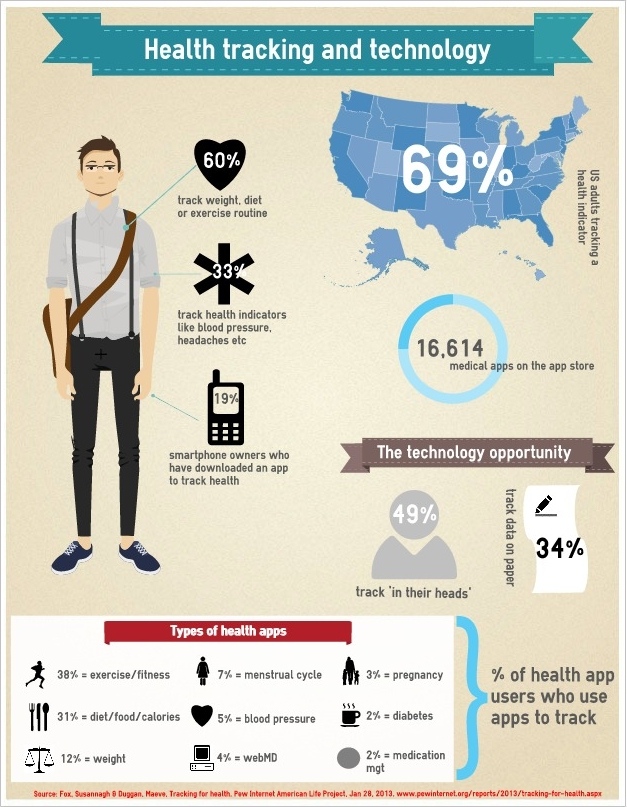 As the infographic shows, 19% of mobile users in the US are now using mobile health apps as part of their overall health tracking programs, with the most using it to help manage their exercise.  It also highlights the large number of people who are forgoing using apps still and are still tracking their health the “old fashioned” way; either in their heads or on paper. But the overall results are that a large majority of people do want some way to track their health, even if a relatively small number of them are using mobile technology right now.

So what’s to be done? Well, as an app developer who’s interested in medical apps, it’s up to you to create medical apps that people want to have on their phones and in so doing, encourage them to expand the sphere of influence that mobile apps have in the health tracking world.

After all, more mobile app users is a win-win, as mobile apps can be much more efficient and reliable than tracking through “in your head” or on paper means and more users means more money and development opportunities for developers out there.

So if you’re an app developer and you’re looking to get into making medical apps, now is a great time to start. And remember, if you need a Mobile Backend for your app at any point, why not talk to us at Kumulos (BaaS)? We’ve got a solid Mobile Backend as a Service that can support almost anything you want to throw at it (except bricks, the servers are not fans of bricks), and make your development life a whole lot easier to boot. Did we mention that the Kumulos mobile backend is HIPAA compliant? We are and we just did.

Ready to get that health app started? Sign up for a FREE trial today with Kumulos and get coding.