We’ve seen an explosion in the use of digital fitness apps over the past 24 months, largely due to COVID-19. Gyms being closed, exercise classes cancelled and team sports a no-no, fitness fans or just those who have binge watched Netflix have been downloading home fitness mobile apps like never before. We have seen a year on year increase of more than 60% in fitness app downloads, with Europeans spending 70.2% more in health and fitness apps in 2020 according to new data from SensorTower.

It’s not just all about downloads, we have also seen interesting shifts in exercise habits. With working from home being the new norm, time-habits have shifted, we’ve seen how daily exercise habits have changed. 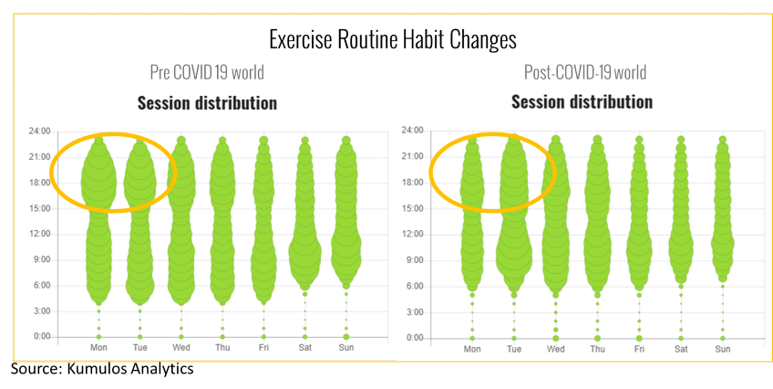 We talk to a lot of mobile app publishers in the Fitness Space. Some of the world’s largest and most successful fitness, health and wellness apps are on the Kumulos platform.

Many mobile apps have found it straightforward to ride this wave of demand and collect new users, but the big challenge is understanding how to capitalise on this change to mobile fitness and turn COVID-casual users into long term super-users. Like pretty much any good habit in life, it has to be worked on. Mobile app publishers have to work hard to keep this surge of new users on habit, engaged and maximise the commercial success.

Data from Appsflyer found that in 2020, apps lost on average $57,000 per month because of uninstalls, marking a 70% increase over uninstall rates in 2019. Apps that don’t invest enough time in an engagement strategy will not retain users long term but focus needs to be applied at every stage of the customer acquisition cycle.

Acquisition is an essential stage in growing revenue, attracting the right kind of user will see loyalty build and revenue increase. Retaining those users for longer and turning a higher percentage into highly engaged super-users will also have a huge impact on your bottom line.  Just a 1% reduction in churn can deliver a 10-17% increase in profitability for the app, especially if this is amongst your high value highly engaged app user cohort.

When it comes to health and fitness apps, it’s clear to see that now is the time to capitalize on current user behaviour and keep these users engaged and retain them through-out the lifecycle of the app.

So here are our top 7 ways to drive up user retention in fitness and health apps.

1. Get a Holistic View of App Users

You can’t fix what you can’t see.

Effective Retention is all about the technology stack that you have in place. Knowing what’s happening and acting on those insights with highly relevant and targeted messages separates the successful fitness apps from the also-rans. Making sure that there aren’t blind spots in your data and that you stay in touch regularly with users is important. Having this in one place, with a single-source-of-truth, so you aren’t flip flopping between different systems is crucial.

What we often see is apps with decent visibility over user behaviour like download volumes, DAU/MAU ratios, engagement and retention statistics. Which is great. But the thing about behaviour analytics is it’s after the fact. It’s viewing your app through a rear view mirror. Changing what’s gone is much harder than predicting what’s going to happen and preventing it.

So, what we see successful fitness apps doing is making sure they have a holistic view of their app users, across the entire life-cycle of the user in a unified platform so everyone across their team is judging success based on the same data set.

Knowing how well the app is performing in the hands of the user and proactively communicating any problems will keep users interested. For example, knowing that a large number of your users in-app experience has got worse recently (which was a common issue after the sudden release of iOS14 last year), means you can predict churn and act. Seeing and acting on app crash increases early, before too many users are impacted can stop a glitch turning into a rout of users on that operating system. All too often this crash data is only accessible by the developer, not the product owner and as such is a blind spot. Often the first thing Product Owners see if they are watching carefully and if their analytics package gives them this granular visibility, is an up-tick in churn for Apple device users. For bigger apps, this trend can often be lost in the overall noise of the app, so they don’t see the root cause until it’s a rout and too late. Users are gone. This is a common problem when apps scale rapidly, as many fitness apps will have done in recent months.

Another common blind spot is Customer Sentiment and what users are saying about the app in public places where potential new users hang out. App listing in the app store or Google PlayStore for example. To continue the example of iOS 14, being able to easily see how a technical glitch with users of that OS version is causing a rise in poor app store reviews, then with your behavioural analytics seeing a fall in new downloads on that platform and an increase in existing iOS customer churn means you can see the impact on both new user acquisition and user retention. Seeing the cause and effect means you see both sides of the equation, are on the front foot, alerted early and have a chance to stem the churn.

And what about when things go well? User churn is a fact of life.

To really boss at managing-up user retention you need to be thinking proactively and catch users before they think of churning. World-leading Fitness Apps use automatic predictive messaging to contact users when their behaviour change could signal churn.  Fitness, wellness, mindfulness, diet and many health apps have a huge advantage here as routine is important. So, understanding user cadence and knowing early when user behaviour patterns change means you can be proactive and catch wavering users before they churn. A platform that watches usage patterns and when they change sends a series of  situational messages to engage users, drives up retention. This catches users as they wobble, before they fall out of the habit of using your app.

So what do we mean by situational Messaging? For users, not all contact is good contact. We often get asked about best practice around frequency of contact. In fact this is the wrong question. Its not about frequency, its about relevance. Relevance to the situation of the user at that specific moment in time.  I would be happy to get 4+ messages a day from one app but from another app, one message a week would annoy me. If the message is relevant to my here-and-now and is information I want, then I am happy to get the message. If it’s noise, messages trying to sell me stuff, upgrade to this, pay extra for that, special offer for you only today… then that’s noise I’ll simply screen out, or worse, your attempts to stop me churning may actually encourage me to uninstall the app.  Especially true for Fitness Apps, content needs to support my goals (the reason I downloaded the app in the first place) for it to be valuable to me.

That doesn’t mean messages can’t sell. You are a business after all. To receive a message that’s personalised and specific. 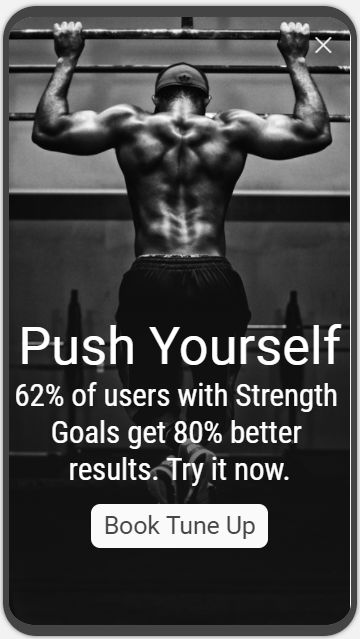 A message like this is more compelling than 15% discount today only. First, you don’t need to cut your price and second you are making it clear that your app will deliver the results they want, if the user maximises its potential.

Rich media content messages drives substantially better results. Up to 43% greater message interaction from rich media messages compared to text only. All forms of fitness, wellness, mindfulness and health apps are perfect for highly visual,  rich media messaging. Here you can embed video into your messages to promote new content or just coach users on better techniques. Send out a series of messages on Technique Optimization to maximise users results. Good for your highly engaged “super-users” as well as capturing those at risk of churn.

Big successful apps lose fewer users. They have simple but effective ways to capture users attention with contextual and situational rich media messages that keep super-users engaged. They know when user cadence has changed, spot the signals of churn early and re-engage users before they have even considered deleting their app. Lastly they understand what each individual user is trying to achieve and communicate with them in language that supports their goals.

If you’d like to find out more about how Kumulos can help your fitness app engage users and retain them longer, please sign up for your free no obligation demo of our platform and find out how we can help your app.