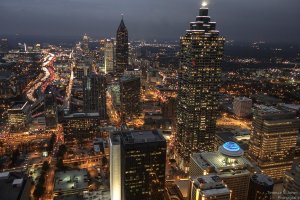 When people think of Georgia and Atlanta in particular, mostly images of peaches, Coca-Cola and large antebellum plantations spring to mind. But “Hotlanta” has a lot more to offer than big old houses and sugar water. Atlanta is also home to the 10th largest economy in the United States and the 18th largest in the world. In addition to Coca-Cola, companies like Delta, Home Depot and UPS have all decided to call Atlanta home. But it’s not just the brick and mortar businesses that are turning to the Peach State – in 2017 Forbes magazine picked Atlanta as one of the 5 Cities to Become Tomorrow’s Tech Meccas.

So we decided to turn our eyes to this jewel of the south and compile another one of our “Best of” lists. In no particular order then, here are our picks from the Top Atlanta Mobile Software Developers.

Headquartered in the 4th largest tech hub in the entire United States, Atlanta Tech Village, AppZoro is a full-stack development that prides itself on their Georgia roots and is well respected in the Atlanta startup community. How well respected? Let’s just say that when it came time for Atlanta Tech Village to build an official mobile app – they turned to none other than AppZoro. The Atlanta-strong team at AppZoro develop for Android, iOS as well as web apps and, with a 100% client satisfaction guarantee on all completed projects, it’s no wonder that businesses like Shouty, Vimbel, and The Hotelier’s Network have turned to AppZoro for their development needs.

Like the other agencies on our list, Big Nerd Ranch develops and designs apps for Android, iOS and web. But where Big Nerd Ranch differs is their commitment to training and growing the developers, not just in Atlanta but all over the world. In fact, 19 of the world’s top 25 apps were built by developers who trained at Big Nerd Ranch. In addition, the Nerds at the Ranch also offer development boot camps for individuals and teams, write best selling books, and broadcast The Frontier, a screencast all about advancing your app development skills. Companies who have been helped by the nerds include Pepsi, Zappos, Google and many more.

Headquartered in the historic town of Marietta and with an office in Atlanta, SolutionBuilt entered the digital game in 2004 by building custom web applications. They were soon sought after by global marketing agencies for familiar names like BP, Coca-Cola, and InterContinental Hotels Group. Fast forward to 2018, these tech-gurus have continued to step up their game by opening their doors to SMB’s and Fortune 500 companies to provide custom websites, marketing, and app development. They also have become the go to developers in the medical industry for their app development with their experience on PHI, Security, and HIPAA compliance. Boasting a 100% success rate in their app development process, SolutionBuilt develops native and hybrid apps for iOS, Android, wearables, web applications, and admin panels. With domain experience in multiple verticals, they accelerate project’s ROI with proven processes, awesome design skills, marketing prowess, and technical know-how. What makes SolutionBuilt different is their fixed price guarantee for every project – meaning you’re not going to get ugly surprises when it comes to pay the bill. Their satisfied clients include Arthritis Foundation, Buckhead Life Restaurants Group, Georgia Public Broadcasting, and TeleMed.

With a name that brings to mind images of the fiercest of the dinosaurs (just check out the animation on their home page), you’d think a mobile app development company named Tyrannosaurus Tech would be ready to devour all challengers. Tyrannosaurus Tech does in fact kick ass in the mobile app marketplace, but they do it with an appropriately toothy dinosaur grin on their faces. That’s because Tyrannosaurus Tech is an Atlanta-based software development agency that takes app design and development (but not themselves) seriously. They develop for both iOS and Android, for both native and hybrid apps. In addition, they can also work with Ruby on Rails, Java, React and WordPress. Tyrannosaurus Tech even offers a free developer consultation to make sure that your project gets off on the right (dinosaur sized) foot. Their portfolio ranges from big brands like Porsche and Emory University down to startups like Gather and even non-profits like Task Force for Global Health. The team prides itself on working hand in hand with clients to make the process of custom software development fun and non-intimidating.

Founded in 2006, PointClear Solutions began by bringing enterprise software development to major healthcare providers around the world. Since then, they’ve expanded beyond healthcare and now develop mobile software solutions for a number of different industries. PointClear’s main HQ is Atlanta, but they also have offices in Nashville, Birmingham and New York City. The number of awards they’ve won could fill a paragraph alone, but to name just a few they include a Top Mobile Application Development Company in New York for 2016, a Top 12 App Development Company for 2017 from Clutch and a Gold prize in the 2016 W3 Awards for Best Sports Mobile App sites. They’ve built mobile apps for such healthcare giants as Walgreens, St. Jude Medical and Navicure. But, as we said, PointClear develops for more than just the medical field. Some of their recent mobile apps include KeyMe, AccepTx Pro, Arrcos 360 and – oh yeah – the BeFunky app.

Stable|kernel was founded by Joe Conway in 2013. Prior to that, Joe served as a board member, engineer, and instructor for one of our other Atlanta software pics, Big Nerd Ranch. Joe is also one of the authors of the Amazon best selling iOS Programming Ranch Guides

Their app development services for iOS also include Siri integration, Apple Pay, TouchID, Apple TV and Apple Watch. Development services for Android include Android Pay, Eddystone Beacons and location services, Android Wear, Android TV and Android Auto. And if that isn’t enough, stable|kernel also offers a full range of IoT development. They’ve done work in just about every industry, including healthcare, automotive, retail, food services, and manufacturing. Their clients have included global brands like Rheem, Mailchimp, and Target as well as startups such as Moxie Sports.

Toolbox No. 9 is a UI/UX Design and Development agency that creates web and mobile applications with Angular.js, Node, Ruby on Rails, IOS and Android. They work hard, but that doesn’t mean they take themselves too seriously – they introduce the team members as “The Tools” on their contact page. Besides UX/UI, the Toolbox team also handles project management, mobile and full-stack web development. Their web and app work includes clients like the Center for Disease Control, Lego and the Cartoon Network.

Watch the video below to see the Toolbox No. 9 team bring “Toolbot” to life!

Some of the agencies on our list split their services between web and mobile. This can sometimes be an advantage when it comes to reaching out to different clients. Dragon Army isn’t one of those. To them, the future is mobile and that’s all they’re concentrating on. That’s because they see mobile as the bestway to reach out to customers to build lasting relationships. That’s why companies like Coca-Cola, IHG, Equifax and Turner turn to Dragon Army for their mobile app needs. But don’t think that makes Dragon Army a stick in the mud – they also have their own mobile studio where they build games (at their own expense), launch them and then use the profits and experience to make even more kick-butt apps for their clients. Dragon Army has been named as one of the Top App Development Companies in Atlanta by Clutch, the Most Admired CEO by Atlanta Business Journal, and won the Best Mobile Gaming & Fundraising App at the 2016 Atlanta Mobile Awards.

Here’s a short TV spot for one of their most popular games, Little Broken Robots.

Another “old timer” in the app world – first established in 2007 – Digital Scientists creates mobile apps, websites, ecommerce stores and IoT applications from their headquarters in Alpharetta, Georgia. So technically not Atlanta, but they have an office there as well as one in South Carolina so that’s close enough. They also maintain offices in Atlanta and South Carolina, so we’ve decided to include them in this list.  On the mobile end, they develop for Android and iOS, as well as hybrid and HTML5 apps. Their suite of development tools includes Ruby on Rails, JavaScript, CSS3, AngularJS, Ionic Framework, Beacons, Elasticsearch and Cordova, just to name a few. Digital Scientists also pride themselves on their speed – they can take an app or product from concept to market in 90 days or less. Recent mobile apps they’ve developed include products for NAPA MyUS.com and Hubbell.

Here’s a short interviews with some of the Digital Scientists:

So those are our picks for the Top Atlanta Mobile Software Developers. How did we do? Did we miss any of your favorites? Be sure to leave us a link below, or reach out to us on Facebook or Twitter.