Here at Kumulos we talk a lot about trends in mobile and in particular back end as a service. The markets in the US, Europe and Asia and how they’re driving the mobile world. Emerging markets in India and China are the next wave, ready to break on us at any moment. But there’s another market in the middle of all this that’s got huge potential and numbers. Where? The Middle East of course.

You may or may not know it, but the Middle East is a hotbed for mobile right now. The United Arab Emirates has one of the highest smartphone penetration percentages in the world at 62%: 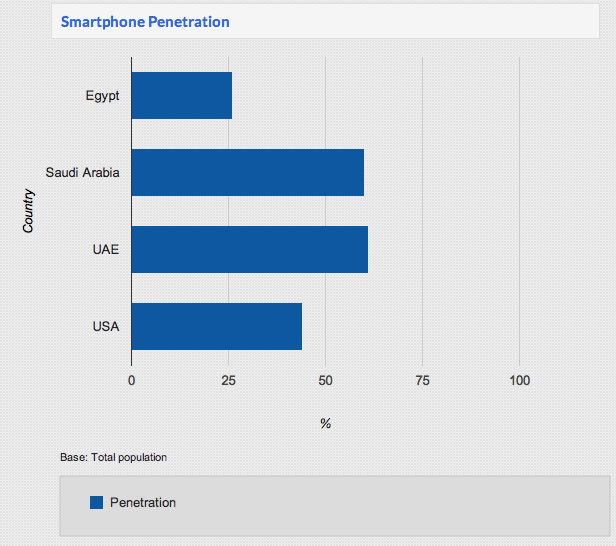 If you look at the graph you’ll see that that’s a substantial amount more than the US and Europe, whilst a little better, isn’t doing much better.  There’s also some interesting numbers that show that mobile users in Egypt use their smartphones for shopping much more than those in the west. How much  more? 80% of smartphone owners say that they’ve used their phone for shopping, compared to 62% in the US and 56% in the UK. Google also have noted that mobile advertising is more effective, with 90% of users surveyed saying that they have noticed adverts and many had also clicked on them.

The demographic in the Middle East that are using smartphones are overwhelmingly young, more than 72% of smartphone users are under 34 and more than 60% are male. When surveyed over half of respondents said that they wanted a smartphone as their primary electronic device, citing the portability and flexibility of the devices as their main reasons.

It’s also reported that in many of the more affluent countries in the area, having more than one smartphone is so common that phones outnumber people; this is an especially prevalent thing in Saudi Arabia apparently.

So with all this evidence out there, why are app developers ignoring this location? Get out there and start bringing your app development skills to the table and tap into this under reported but eager market.